Pupin was born in the village Idvor, Banat (then the Austro-Hungarian Empire) to a Serbian family. Pupin emigrated to U.S. when he was only 16.

He spent the next few years in a series of menial jobs, learning English and American ways. He entered Columbia College in 1879, where he became known as an exceptional athlete and scholar. A popular student, he was elected president of his class in his junior year. He graduated with honors in 1883 at Columbia College, New York and became an American citizen at the same time. He obtained his Ph.D. at the University of Berlin under Hermann von Helmholtz and in 1889, he returned to Columbia University to become a teacher of mathematical physics in the newly formed Department of Electrical Engineering. Pupin's research pioneered carrier wave detection and current analysis.

Pupin's 1894 invention, now known as "Pupin coil", greatly extended the range of long-distance telephones. This was a very important invention and he became wealthy when American Telephone and Telegraph acquired the rights to the patent. Pupin's work followed closely on the pioneering work of the English physicist and mathematician Oliver Heaviside, which predates Pupin's patent by some 7 years. Pupin was among the first to replicate Roentgen's production of x-rays in the United States. He in 1896 invented the method of placing a sheet of paper impregnated with fluorescent dyes next to the photographic plate, thereby permitting an exposure of only a few seconds, rather than that of an hour or more. He also carried out the first medically-oriented studies of the utility of x-rays in the United States. In 1901, he became a professor and, in 1931, a professor emeritus of Columbia University.

In 1911 Pupin became a consul of Kingdom of Serbia in New York. In his speech to Congress on January 8, 1918, known as the Fourteen Points speech, U.S. president Woodrow Wilson, inspired by his conversations with Pupin, insisted on the restoration of Serbia and Montenegro, as well as autonomy for the peoples of the Austria/Hungary monarchy.

Michael Pupin's autobiography, "From Immigrant to Inventor", won the Pulitzer Prize in 1924. He also wrote "The New Reformation" (1927) and "Romance of the Machine" (1930), as well as many technical papers. In his many popular writings, Pupin advanced the view that modern science supported and enhanced belief in God. Pupin was active with the Serb emigre societies in the USA. He was the first president and founder of the Serbian National Defense Council of America. In 1918, professor Pupin edited a book on Serbian monuments, under the title "Serbian Orthodox Church".

Pupin was president of the New York Academy of Science, member of the French Academy of Science and the Serbian Academy of Science. Pupin was also president of the Institute of Radio Engineers in 1917 and the American Institute of Electrical Engineers in 1925-1926.In 1920, he received AIEE's Edison Medal for his work in mathematical physics and its application to the electric transmission of intelligence. Columbia University's Pupin Hall, the site of Pupin Physics Laboratory, is a building completed in 1927 and named after him in 1935. A small crater on the Moon was named in his honor.

New York Academy of Sciences - A Tribute to Michael Pupin 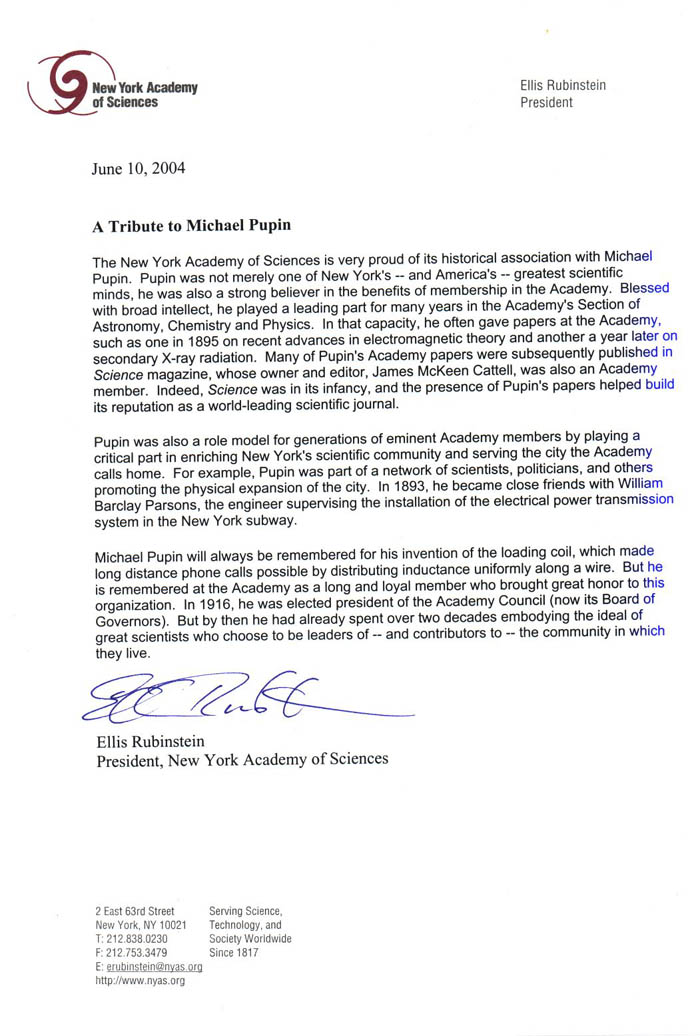