Please join the Harriman Institute and the Njegoš Endowment for Serbian Language and Culture for a talk by Svetlana Tomić, Alfa University (Belgrade).

Tomić argues that, although women’s memoirs have remained culturally marginalized in Serbia, studying the neglected writings of women opens the possibility for a better appreciation of society and its ability to transform. How do female memoirists contrast with male writers such as Đorđević, Milićević, and Žujović? Can we find contradictions in their confessional dramas and see the motives for their writing? What can we conclude by comparing the writings of men and women from the period when the Serbian nation was formed? How can we generalize the difference and use it as an instrument for a better understanding of social developments not only in Serbia but in the wider Western Balkans region? 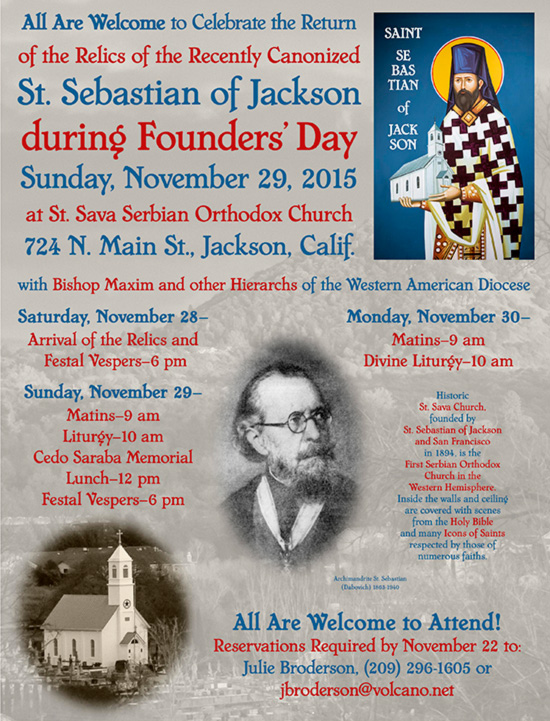 The Njegos Foundation for Serbian Language and Culture presents EVAPORATING BORDERS a film by Iva Radivojević.

Originally from Yugoslavia, a country that no longer exists except in books and films, Iva Radivojević’s family immigrated to Cyprus to escape political unrest. Raised in Cyprus, she is approaching the film as a personal exploration of what it means to have a hybrid existence in which one is always searching for an identity.

On Monday, July 27, 2015, Bishop Maxim met with the Most Blessed John X (Yazigi), Greek Orthodox Patriarch of Antioch and All the East and presented as a gift the book on Christian Heritage of Kosovo and Metohija. Patriarch John thanked the Serbian Bishop and compared the persecution of Serbs in Kosovo, the cradle of Serbian people, with the suffering of Christians in the Middle East, the cradle of Christianity. Yet so many instances of persecution against Orthodox and other Christian populations both in Syria and in Kosovo have gone unnoticed and unreported by our media. In these countries Christians are at best second-class citizens, and are sometimes even treated as aliens in their own countries, denied basic civil rights and the protection of law. .
Read more ...
Empty

The book on Christian Heritage of Kosovo and Metohija was presented in Paris on Monday, June 29, 2015, at 19h at l'Auditorium Jean XXIII de la Mutuelle Saint-Christophe, 277 rue Saint-Jacques.

Bishop Maxim of the Western American Diocese spoke about the theological and historical significance of the book. Raphaëlle Ziadé, a specialist of the byzantine art, from Réunion des Musées nationaux, explained some of the most prominent aspects of the Serbia's medieval visual art in Kosovo and Metohija. She emphasized particulary the a new humanism which characterizes these works, and it was this style that served as a basis for what Gabriel Millet termed “the Byzantine Renaissance.” Jean-François Colosimo, director of Editions du Cerf offered a wider perspective on the position of Christians in the Middle East.

He was a faithful, family man, who was proud of his Serbian roots, but also believed in and achieved the American Dream. Nickola was born on March 20, 1930 in Drazevac, Serbia, Yugoslavia. As a preteen he moved to Belgrade where he completed his education and graduated from the Geodetic College and then worked for the Yugoslavian, Republic Geodetic authority, in Serbia, for four years. In 1956 he accepted a job in Austria and worked for the Austrian Department of Geodetic Authority, for 6 months while he continued his quest to find his father who was missing in action since WWII. From Vienna, Nickola immigrated to the United States with the help and support of the Serbian National Defense Council.

A Collection of Iconographic Essays and Illustrations

The Serbian Orthodox Diocese of Western America is pleased to announce the publication of an outstanding book by Fr. Stamatis Skliris, a disciple of the great twentieth-century theologians Archimandrite Justin Popovich and Bishop Athanasius Yevtich. Fr. Stamatis is a parish priest in Athens and is renowned as an iconographer and as a writer and lecturer on Byzantine iconography.

In the Mirror is the second of a planned collection of works of contemporary theologians. It is an anthology of Fr. Stamatis’ articles which have appeared in Greek and Serbian. In it, he combines adherence to the teachings of the Church Fathers with a vibrant expression of faith through the experience of Christ in the Church. The book is adorned with more than 200 striking icons and illustrations by Fr. Stamatis.