“For this to happen on such a holy day, I don’t know what to say,” said Alex Velic, a 31-year-old churchgoer, as enormous fireballs erupted from the shattered windows of the Serbian Orthodox Cathedral of St. Sava on West 25th Street.

“To see it burning like that is such a shock. It’s just so sad,” he said. “I can’t think of the words to express how I’m feeling.”

On Saturday 16 April, His Grace Bishop Maxim of the Western American Diocese of the Serbian Orthodox Church visited the Orthodox School of Theology at Trinity College and presented a new book published within his diocese entitled The Christian Heritage of Kosovo and Metohija: The Historical and Spiritual Heartland of the Serbian People.

Bishop Maxim spoke about the efforts of the Serbian Orthodox Church to preserve its centuries-old monuments and the Christian heritage of Kosovo and Metohija.

North American Society for Serbian Studies is inviting nominations for the annual Miša Djordjević Book Prize.​ ​The prize is awarded annually to a distinguished scholar or student in the area of Serbian studies.

Nominations should be sent to Slobodanka Vladiv-Glover by 15 May 2016: This email address is being protected from spambots. You need JavaScript enabled to view it.

Previous recipients of this award include Charles Simic, the fifteenth Poet Laureate of the United States.

More about the Prize can be found here: http://serbianstudies.org/bookprize.html

The recipient of the 2013 "Mihajlo Misha Djordjevic" Book Award is Radmila Gorup for the collection "After Yugoslavia: The Cultural Spaces of a Vanished Land", Stanford University Press, 2013.

The recipient of Mihajlo Misha Djordjevic Book Prize for 2009 is Gregory A. Freeman for his book The Forgotten 500: The Untold Story of the Men Who Risked All for the Greatest Rescue Mission of World War II. 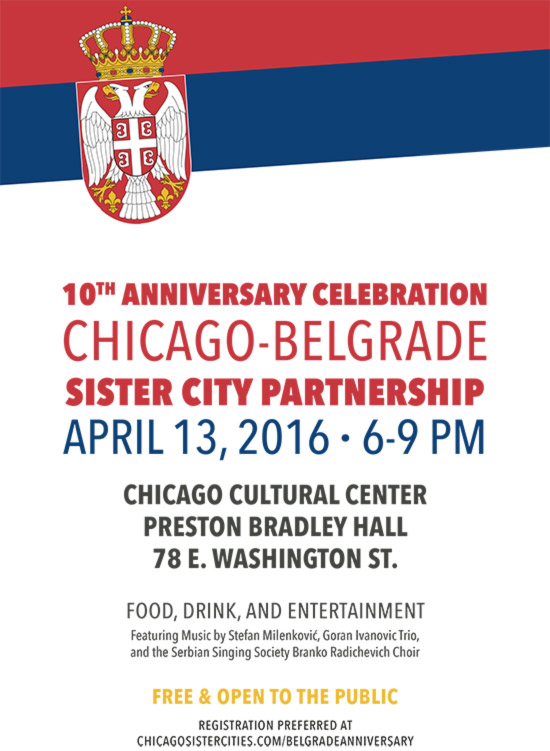 LeitmotivArts is thrilled to announce the release of the debut EP DREAMER from Aleksandra Denda available worldwide on March 17th 2016.

Two years after having her single "In the Dark" selected as The Song Of The Day on Jon Oliver's The Main Ingredient Radio, Aleksandra releases her debut EP. DREAMER - wonderful patchwork of acoustic and electronic elements, intertwining Neo Soul, Jazz, World Music and Electronica into Aleksandra's own ethereal sonic canvas.

Vladimir Kulenovic, music director of the north suburban Lake Forest Symphony, is at once selfish and selfless, useful qualities for a bright, ambitious, young musician out to make a name for himself in the fast track of symphonic conducting.

Selfish, because the Belgrade, Serbia-born American conductor's career ambitions are, by his own admission, limitless. Now in his second year with the Lake Forest professional orchestra, Kulenovic, who is 35 and lives in Evanston, has energized the ensemble and its audience. The Solti Foundation U.S. has taken notice. Having already awarded him career-assistance grants in 2012 and 2013, the foundation, which supports young conductors of exceptional promise, honored him a third time by naming him its $25,000 Solti Conducting Fellow for 2015, a prestigious honor indeed.

The Church at Prayer

by Archimandrite Aimilianos of Simonopetra

Many readers of the addresses of Elder Aimilianos, which have been published in the five-volume series, rchimandrite Aimilianos, Spiritual Instructions and Discourses (Ormylia, 1998-2003), have frequently expressed the wish for an abridged and more accessible form of his teaching. In response, we are happy to inaugurate a new series of publications incorporating key texts from the above-mentioned collection. Other considerations have also contributed o this new project, such as the selection of specific texts which address important, contemporary questions; the need for a smaller, more reader-friendly publication format; and the necessity for editing certain passages in need of clarification, without however altering their basic meaning.

Above all, the works collected in this volume reflect the importance which the Elder consistently attached to prayer, spirituality, community life, worship, and liturgy. Thus the experientially based works "On Prayer", and "The Prayer of the Holy Mountain", which deal primarily with the Prayer of the Heart, appear first, followed by the summary addresses on "The Divine Liturgy", and "Our Church Attendance". These are in turn followed by the more socially oriented discourses on "Our Relations with Our Neighbor", and "Marriage: The Great Sacrament". Finally, the present volume closes with the sermons on "Spiritual Reading" and "The Spiritual Life", which in a simple and yet compelling manner set forth the conditions for "ascending to heaven on the wings of the Spirit".

It is our hope that The Church at Prayer will meet the purpose for which it is issued and will serve as a ready aid and support for those who desire God and eternal life in Him.